Barry’s paintings, which are officially listed as investment art, have sold in London at major auction houses such as Christies and Bonhams

In honour of his contributions to charity through his art sales, Cancer Research UKcreated The Novis Wall at Christies St James for several of their annual art auctions.

Born in Brighton, England, in February 1944, Barry Novis grew up in less-than-comfortable circumstances with which he now credits his determination and identification with the subjects of his paintings, many of whom succeeded brilliantly despite economically deprived childhoods. 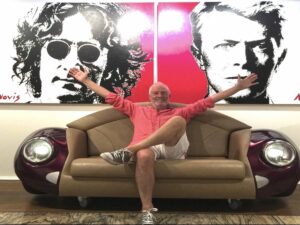 Living in ‘swinging’ London during the 1960s and ‘70s, the heyday of modern pop culture, imprinted upon him a passion for music, sport and art – for colour, vibrancy and individualistic expression.

From the start, Novis’ paintings were always larger-than-life, featuring bold strokes or multiple dots in acrylic or oil on canvas, and these days he also includes abstract in his repertoire with a salute to masters such as Pollock and Richter.